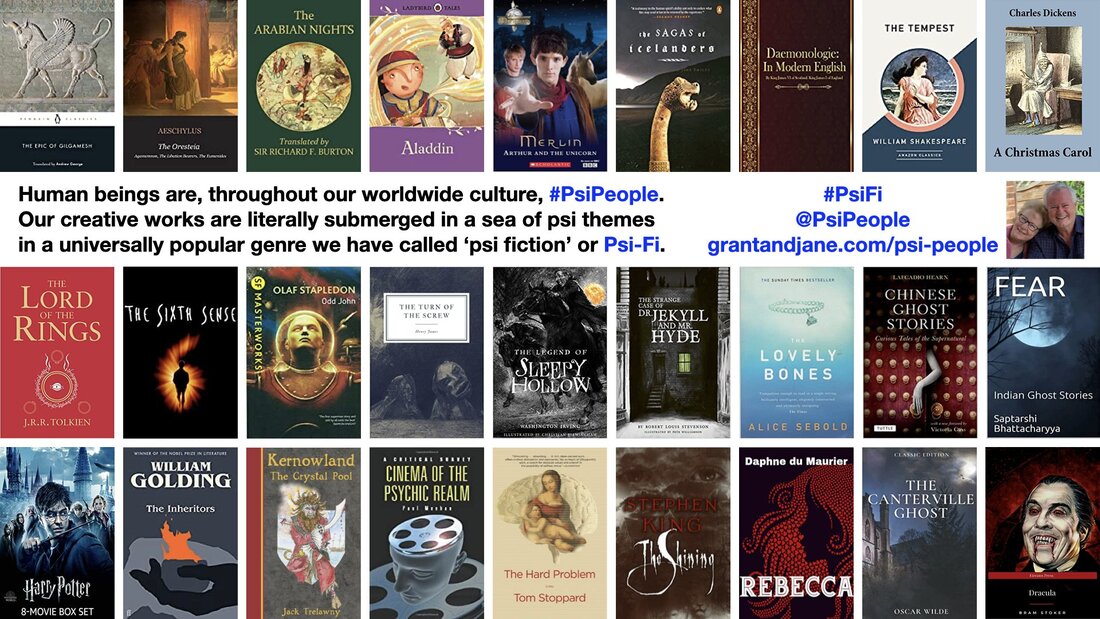 Psi Fiction: The 'Psi-Fi' Genre
​
​As specialist 'psi' writers, we are interested in writing that uses psi themes as literary and dramatic devices around the world and throughout history. Psi themes are often employed by writers to add mystery and increase conflict and tension in the psi fiction genre.

We have shortened 'psi fiction' to 'psi-fi'.
Psi Themes in Psi-Fi Literature & Drama

​From the earliest Sumerian writing in the third millennium BCE, psi themes and the psi-fi genre have been ubiquitous in literature and drama. Psi and psi-fi are literally everywhere. This suggests that human beings are, and have always been, interested in psi phenomena for entertainment.

Below are some examples of psi themes used in psi-fi genre stories throughout history...
But The Arabian Nights aren’t just from Arabia. Dating back as far as the C10th, these tales have origins in North African, Arabic, Turkish, Persian, Indian, and East Asian cultures. In 947 Arab historian Al-Masudi, for example, describes a large collection of a thousand tales from all over the ancient world that he calls the Persian Hazar afsana (A Thousand Stories). The stories circulated for centuries, with new folk tales and renditions being added to the mix over the years.
In both Galland’s text and Richard Burton’s popular 1885 English translation, Aladdin lives 'in a city of the cities in China'. Illustrations of the tales from the Victorian era depict the story and its characters as Chinese. The setting and the characters’ ethnicity begins to shift west to Arabia and the Middle East when the story is told on the big screen in the early 20th century. (Source)
Daemonologie
In 1597, fourteen years before the publication of the King James Bible, King James wrote and published Daemonologie, a philosophical monograph on the supernatural entities believed by King James to wander the earth. The book details a dialogue between Philomathes and Epistemon, two men who seek to uncover the truth of everything from demons to witchcraft through theological and philosophical discourse. These writings fueled the fires behind witch trials for years to come, and are even believed to have influenced Shakespeare’s Macbeth. Originally written in Early Modern English, this version has been transliterated for the comfort of modern readers, providing the authentic Daemonologie experience.
Source: Amazon
Psi-Fi on Screen & Stage
'​In the world of Harry Potter, a ghost is the transparent, three-dimensional imprint of a deceased witch or wizard, which continues to exist in the mortal world. Muggles cannot come back as ghosts, and the wisest witches and wizards choose not to. It is those with "unfinished business", whether in the form of fear, guilt, regrets or overt attachment to the material world who refuse to move on to the next dimension.' J K Rowling on Wizarding World
Amazon blurb: Cinema of the Psychic Realm: A Critical Survey
​Cinema is ideally suited to the world of psychic phenomena. A technique as simple as a voice-over can simulate mental telepathy, while unusual lighting, set design, or creative digital manipulation can conjure clairvoyant visions, precognition, or even psychokinesis.
This book analyzes the depiction of paranormal powers in film, examining how movies like Star Wars, Independence Day, The Green Mile, and dozens of others both reflect and influence the way modern society thinks about psychic abilities. The theme is explored in nearly 100 films from a variety of genres including drama, comedy, horror, science fiction, crime melodrama, and children’s films, providing a concise review of the history and concepts of mainstream cinematic parapsychology.
Amazon blurb: The Hard Problem
Above all don't use the word good as though it meant something in evolutionary science. Hilary, a young psychology researcher at a brain-science institute, is nursing a private sorrow and a troubling question at work, where psychology and biology meet. If there is nothing but matter, what is consciousness? This is 'the hard problem' which puts Hilary at odds with her colleagues who include her first mentor Spike, her boss Leo and the billionaire founder of the institute, Jerry. Is the day coming when the computer and the fMRI scanner will answer all the questions psychology can ask? Meanwhile Hilary needs a miracle, and she is prepared to pray for one.
Psi & 'The Hard Problem' (aka 'The Mind-Body Problem')

So psi is everywhere and 'everywhen' in everyday life and popular culture, which leads to a human fascination for psi-fi.

But whether psi ('Mind Power') is real or only for fiction is a question that has challenged philosophers, psychologists, and scientists for centuries.

The Hard Problem of Consciousness (Source: Internet Encyclopedia of Philosophy)
The hard problem of consciousness is the problem of explaining why any physical state is conscious rather than nonconscious.  It is the problem of explaining why there is “something it is like” for a subject in conscious experience, why conscious mental states “light up” and directly appear to the subject.  The usual methods of science involve explanation of functional, dynamical, and structural properties—explanation of what a thing does, how it changes over time, and how it is put together.  But even after we have explained the functional, dynamical, and structural properties of the conscious mind, we can still meaningfully ask the question, Why is it conscious? This suggests that an explanation of consciousness will have to go beyond the usual methods of science.  Consciousness therefore presents a hard problem for science, or perhaps it marks the limits of what science can explain.  Explaining why consciousness occurs at all can be contrasted with so-called “easy problems” of consciousness:  the problems of explaining the function, dynamics, and structure of consciousness.  These features can be explained using the usual methods of science.  But that leaves the question of why there is something it is like for the subject when these functions, dynamics, and structures are present. This is the hard problem.