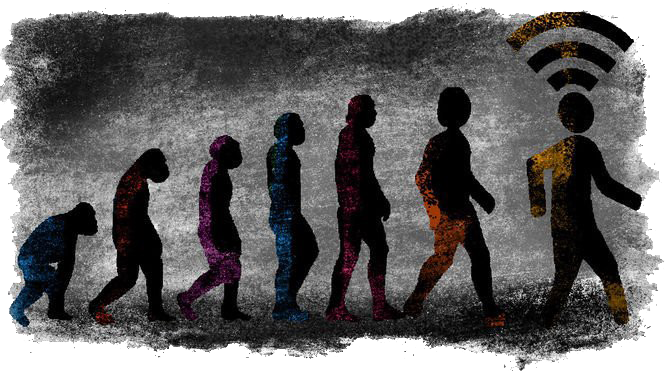 Psi phenomena form a huge part of human history
In widely differing cultures and ages throughout history, a large proportion of the world's human population has experienced, reported, and recorded psi phenomena. This psi experience among the mass of humanity may be why the fascination of our species with psi is such a strong theme in popular culture (events, newspapers, magazines, comics, books, movies, TV, social media, etc.). The fascination naturally bubbles over into a wide range of psi-based fiction, which we call 'Psi-Fi'.

Are psi experiences increasing?
Given the evident fascination, we are interested in whether psi experiences are increasing in number and intensity. It may be that Homo sapiens (wise human) is evolving into Homo psipiens (psi-wise human), which is our made-up word attempting to describe the evolving species; with apologises for mixing Latin with Greek. Alternatively, it may simply be that, in an age of mass communication and social media, more people are reporting psi experiences so it just seems like they are increasing.

The Homo psipiens hypothesis
If the natural evolution of the sentient human species, Homo sapiens, is in the direction of greater psi powers towards Homo psipiens, then increased, widespread (objective, fair, scientific) testing, data, and evidence-gathering over the longer term will show an increasing proportion of humans with psi abilities as the species evolves.

Interesting and Eminent Psi People
CAN YOU HELP WITH THE DATA AND EVIDENCE GATHERING?
REPORT A PSI (PARANORMAL) EXPERIENCE TO THE SPR

Do you think you have had a psi (paranormal) experience?

The Society for Psychical Research (SPR) is a scientific organisation established in 1882 which undertakes psi research.

THE SOCIETY for Psychical Research [SPR] was set up in London in 1882, the first scientific organisation ever to examine claims of psychic and paranormal phenomena. We hold no corporate view about their existence or meaning; rather, our purpose is to gather information and foster understanding through research and education ... One function of the SPR, being a scientific organisation, is to collect material of a paranormal nature for analysis. Your experience could be a valuable contribution to our scientific data base, and we would like to hear from you. This includes reports of extraordinary experiences, past and present, from all over the world.

You can find out more and report your psi (paranormal) experience to the SPR here:
​
https://www.spr.ac.uk/report-an-experience